It is with great satisfaction that the ATA welcomes the awarding of the Medal (OAM) of the Order of Australia - one of the most prestigious awards in the Australian honours system - to our recently retired Federal and Victorian State President of the ATA, Colin Alderson.

Australia’s principal and most prestigious system of honours, the Order of Australia was established in 1975 to confer the highest recognition of outstanding achievement and service within and to the community.

The Order of Australia is a most fitting and appropriate honour for Colin Alderson who has enjoyed a distinguished career as an Australian racehorse trainer over nearly 50 years until his retirement earlier this year. Apart from his widely acknowledged skills as an outstanding successful horseman, Colin’s leadership, contribution and achievements in his representative role on behalf of the racehorse training profession was equally outstanding and profound.

Over nearly 30 years as a Committee member, Vice President, Federal and State President, Colin Alderson worked actively and selflessly to secure many changes and reforms and introduce landmark initiatives for the training profession.
Key reforms in recent years included the blueprint for a Security Model for financial transactions between Owners and Trainers, the establishment of the Australian Trainers’ Trust, with initial seed funding from the Victorian State Government to provide financial assistance for trainers nationwide facing necessitous circumstances, and a Trainers Wellbeing and mental health program in Victoria with the support of Beyondblue and Racing Victoria.

On a broader and significantly important scale, under Colin’s leadership at both a State and National level the ATA has evolved into an organisation that is consulted frequently and as a matter of course by Principal Racing Authorities, Governing Bodies, State Governments and Public Authorities on issues and matters relating to thoroughbred racing. The ATA is recognised as a constructive and credible representative voice in Australian racing.

During his training career Colin Alderson trained the winners of eleven (11) Group One races and seventeen (17) Group Two races. His Group One wins were recorded in some of Australia’s iconic races – ranging from a Caulfield Cup, AJC Derby, Australasian and SAJC Oaks, Rosehill Guineas, 1000 Guineas, Queensland Derby and Adelaide Cup. He won four Group Ones with the mighty Sky Heights, arguably one of the best horses he trained.

The awarding of the Order of Australia to Colin Alderson is a significant milestone for the profession of racehorse trainers in Australia. It is both a tangible recognition of excellence in one of the oldest and most enduring professions in our society as well as for outstanding service to that profession as a whole. It is an Award which elevates the Training Profession and its status in the community.

As an organisation the ATA can be proud that both it’s recent Federal Presidents – the late Bob Hoysted and Colin Alderson were both recipient of the Order of Australia – our highest and most prestigious Honours System. 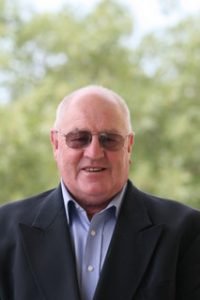