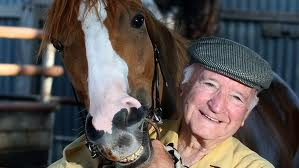 Under his tenure as ATA Federal President, Len was fortunate to meet Her Majesty The Queen during her visit to Morphettville racecourse in October 1981.

Len, affectionately known as "The King of Cheltenham'', first established stables in the early 1950s and had immediate success with his first horse MURDECT.

His next great horse was CALIENTE, who won two Port Adelaide Cups in the 1960s.

Smith's greatest success on a racetrack was achieved with the filly MY BRIGHTIA, who won the Group 1 VRC Oaks in 1996.

When asked to name the favourite horse of his career, Smith never hesitated - SKYBEAU. The gelding contested five Melbourne Cups, with a third behind Saintly in 1996 his best result.

Our sincerest condolences are extended to Len’s wife Peg, daughter Marilyn and family and his many friends in racing.