McDonald, who started training racehorses at the age of 30, had a sound education in horses and was one of Australia’s most respected horse breakers, working alongside the likes of Bon Hoysted and Geoff Murphy.

McDonald celebrated great success in the 1980s, with MAGARI, winning three Group 1 races in 1982. He won the Caulfield Cup with TRISTARC in 1985 and again three years later with IMPOSERA, and then went on to become only the third trainer, behind father-in-law Bon Hoysted and TJ Smith, to win the Blue Diamond/Golden Slipper double with the filly COURTZA in 1989.

McDonald also had success in jumps racing, winning an Australian Steeple and a Grand National.

It was later in his career, however, that he enjoyed the most success with WEEKEND HUSSLER, who won six Group 1 races as a three year old, including the Caulfield Guineas, Oakleigh Plate, Newmarket Handicap and Randwick Guineas and which saw the popular horse crowned the Australian Racehorse of the Year in 2007/08.
WEEKEND HUSSLER then added a seventh Group 1 to his CV after taking out the Underwood Stakes as a four year old.

The popular trainer had been battling ill health for many months and spent much of the second half of the year in hospital after suffering complications following heart surgery in June.

Our sincerest condolences are extended to Margaret and Clinton, the extended McDonald family and their many friends in racing. 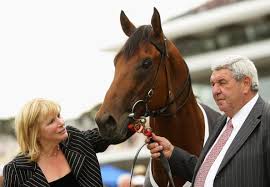